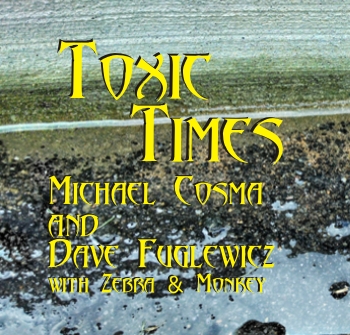 by
Dave Fuglewicz and Michael Cosma

Mike and I decided to do another release around January of 2016. This one took a while to complete. Both of us had other projects going on but here we are, near the end of August of 2017, ready to release. I feel that these are some of the best compositions we have done for our collaborations. Also, there was a contribution from a on-line contact of Mike's, who wants to go by the name of "Zebra and Donkey". He is responsible for "Radium" and Mike used a few of his sound source files. Vocals on Freaky Things by new5ense.
If you have enjoyed our previous releases, I know you will enjoy this one also.
Dave Fuglewicz 8/20/2017
---|> Contact <|---
Dave Fuglewicz
http://www.davefuglewicz.com
Michael Cosma
http://www.mudballrecords.com

Reviewer: AxelMundi - favoritefavoritefavoritefavorite - October 8, 2017
Subject: Musical quantum physics: "Toxic Times" Michael Cosma and Dave Fuglewicz (with Zebra & Donkey)
I'm developing a theory about this stuff; I admit it is a Sunday morning armchair hypothesis, probably unproveable. Back to that in a minute.

Art music of all kinds is idiomatic. It uses motifs that have been successful before. The genre which Dave Fuglewicz and Michael Cosma are immersed in here is no exception. Unlike some other practitioners, these two do not use idiom as an end in itself. If it sounds familiar sometimes, look deeper for the message. The occasionally revealed "natural" or ordinary sound, such as a human voice or an electric guitar, give a sense of an organic source. I believe this is a Cosma touch. This area of composition, which even Fuglewicz (perhaps reluctantly) must still call "experimental music", though it has been going on for nearly a century, and with its history supporting it, has to be careful of slipping too far into the pasture of Pop! (Just kidding.)

But back to the theory. It has two facets. The first is that I think Dave Fuglewicz and Michael Cosma are contacting, and then recreating with their electronic tools, the subatomic source of the music of our time. Like the photos that come in from Hubble, we hear in this music the original vibrations at the base of the pop music of this era. I can't yet prove this theory, but I can give another illustration, which is the second facet:

An Indian yogi said to his disciples (paraphrased from my memory), "If you could see yourself as you really are [a cloud of electrical impulses vibrating violently and brightly], you would be too disoriented to live. Only because our senses build an illusion of stability can we act in this world." Whereas some practitioners of this "experimental music" perhaps stay close to the idiomatic surface, others like these two can hear, at least part of the time, the never-ending current of sound down at the base of the music that many fine musicians polish up and make attractive to the current casual listener. I am assuming that for our time this is rock and roll, because we are talking about electronic sound here, and anyone who is using electricity to make music has that legacy. I'm sure that previous eras--classical, early jazz--would have had their own core essence as well, if there was anyone on the scene who could uncover it. (And I'm not saying there wasn't. Eric Satie perhaps.)

The music of Dave and Michael is my evidence in support of this theory. I think if we could see music as it really is--clouds of vibrating energy, slower than light but the same stuff--we would be seeing, or given our anatomy, hearing, something akin to this music of theirs.

This collection, "Toxic Times", is enjoyable to listen to. If I have a favorite cut it would be "Missing Intellectual Conversation". This is perhaps only because it seems to stand apart a little in style. Also perhaps because it seems more stripped down than the others. But, each piece has a buried treasure that can be found with careful listening. The collaboration of these two, each with a strong sound of their own, makes a unique style. I recommend "Toxic Times" to any serious listener. (I guess it would be pretty good party music, too.)